As Congress was returning from the August recess, there wasn’t much news about the climate bill. The only energy-related news breaking through the coverage of the rancorous health care debates and town-hall tea parties was a study on “energy sprawl” published by five staff members of the Nature Conservancy.

“Renewable Energy Needs Land, Lots Of Land” was the headline of an August 28th story on NPR about the study.

Senator Lamar Alexander of Tennessee, in an Op/Ed published in the Wall Street Journal, summed up the message that was heard by legislators and the public from the news coverage of the study:

“we’re about to destroy the environment in the name of saving it.”

The interesting thing about the news coverage is that none of it addressed the actual analysis. The study didn’t actually measure the impacts of different energy technologies, but rather compiled estimates from a smattering of reports, fact sheets and brochures from government and industry sources in order to arrive at an acre-per-unit of energy figure for each energy technology. Those figures were then applied to the Energy Information Administration’s modeling of four climate policy scenarios under consideration by Congress.

So the coverage was generated not by the study’s results, but entirely by the assumptions that went into it about the relative impacts of renewable versus conventional energy technologies. Looking at the counter-intuitive findings (wind is 8 times as destructive as coal), it’s no wonder that the media took such an interest.

To put those assumptions in perspective, the habitat impact of the Mount Storm Wind Farm in the first image is assumed to be 25% greater than the impact of the 12,000 acre Hobet mountaintop removal mine in the second image (images are taken from the same altitude and perspective; the bright connect-the-dots feature in the windfarm image is the actual area disturbed): “Garbage in, garbage out” is a concept most people are familiar with, but the problems with the “energy sprawl” study go farther than that.

When I taught a course in ecological modeling, we used a hypothetical study on acts of violence in industrialized countries to examine how you could generate any result you desire simply by choosing how to define an “act of violence.” For instance, if you wanted to show that the French are the most violent industrialized society, you might define rude treatment by waiters as an act of violence. The study does something very similar, but worse – it fails to define a consistent measure of land-use impact across the various energy technologies it purports to compare. It’s as though we defined “acts of violence” to include rude treatment only by French waiters, but not by German, English or American waiters.

While I won’t get into detail of the math and science (a full analysis and response is in preparation), here are just a few of the jaw-dropping errors and assumptions that went into the study:

It’s obvious that the authors of this study don’t spend a lot of time thinking about coal mining (the fact that they refer to underground or deep mines as “pit” mines is revealing). That could partly explain the distorted picture the study gives of the impacts of coal mining, but the assumptions are so consistently weighted against renewable energy that it gets hard to ignore. If the pattern of assumptions so consistently tilted against renewables and in favor of coal and nuclear doesn’t raise a red flag, consider the language used in the study. The EIA’s “No International Offsets/Limited Alternatives” scenario, which would emphasize rapid expansion of renewable energy technologies (and which purportedly creates the most “energy sprawl”), was renamed the “Few Options” scenario by the authors. A real gem of a PR strategy from the group that came up with “energy sprawl.”

As for the policy options that the study’s results (and assumptions) favor, the “Core” scenario from the EIA’s analysis of the Warner-Lieberman climate bill was renamed the “CCS” scenario – shorthand for carbon capture and storage. This could also represent a real tipping of the hand as to the policy priorities at the Nature Conservancy. That, in turn, would go a long way toward explaining the blind spot the Nature Conservancy possesses regarding the wholesale destruction of the most biologically diverse forests and streams on the continent through mountaintop removal coal mining. The fact that plants installing CCS will need to consume at least 15-30% more coal to produce the same amount of electricity (if and when CCS becomes available), would cause a little cognitive dissonance in anyone concerned about the environment but supportive of widespread CCS deployment.

What the study didn’t look at

From the perspective of communities impacted by coal mining, a study on energy impacts that looked no further than the land area affected by mining was never going to carry much weight anyway. EPA biologist Gregory Pond, who published a study in 2008 showing the loss of entire orders of insects downstream from mountaintop removal mines, told the news media when the study was released:

“While habitat degradation from mountaintop mining is what one sees on the surface, we found that chemical effects are quite pronounced and limit much of the expected biodiversity from what were once naturally rich, diverse Appalachian stream systems.” 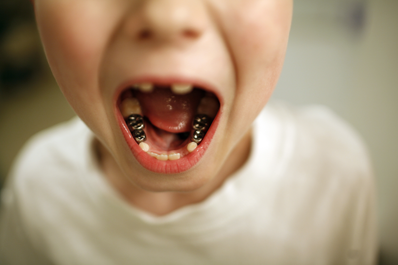 The most important factors in the “what the study doesn’t look at” category, however, are the impacts of energy on people and communities. The thousands of people in Appalachia without access to clean and safe drinking water do not show up in the “energy sprawl” study’s land impact estimates. The photo on the right of a child in Prenter, West Virginia, is the lead photo of a remarkable piece of reporting from the New York Times that provides a lot of insight into the awful tragedies faced daily by families in Appalachia who are forced to drink and bathe in water polluted with coal waste.

The authors of the “energy sprawl” study stated explicitly that aquatic and health issues are not what the study was about, and it wouldn’t be fair to blame them for any failure to address those problems. It’s the inevitable distortions of the study that do the most violence to those fighting for safe homes and clean drinking water in coal and uranium-bearing regions. The lead author addressed some of those distortions directly, shortly after Senator Alexander’s “We’re destroying the environment in the name of saving it” op-ed. Here are a few excerpts from his post on the Nature Conservancy’s blog:

First, climate change is the big threat to America’s wildlife (and to our communities). Severe climate change has the potential to imperil many more species than energy sprawl.

Moreover, we show in our paper that most of the energy sprawl from now to 2030 will happen regardless of whether or not there is a comprehensive climate bill. By far the largest amount of energy sprawl will come from biofuel production, driven by the renewable fuel standard and other laws already in place.

The Nature Conservancy’s tireless efforts to support energy efficiency, build awareness of climate change, and bring climate policy to the table deserve both thanks and respect. But the concept of “energy sprawl,” now that it has been associated with such a distorted picture of the impacts of wind, solar, coal and nuclear technologies, adds nothing but confusion and false impressions to the debate over climate.

The study also does a lot of harm to those working to reduce the impacts of mining and to promote green jobs in their communities. “Nature Conservancy says wind and solar are more harmful than coal” is a talking point that will be repeated in mine permit hearings, utilities commission proceedings, letters to the editor and at coal rallies across the country for years into the future.

There is no way to repair the concept of “energy sprawl” at this point. Environmental and climate advocates would do well to strike that buzzword from their lexicons and literature entirely.